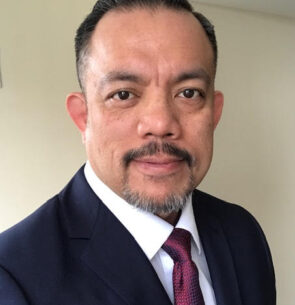 Derek serves as the Resident-Agent-in-Charge for the Diplomatic Security Service’s San Diego Resident Office.  His previous assignments were at the U.S. Embassies in Islamabad, Baghdad, Madrid, and Abuja. In Islamabad and Baghdad, Derek served as the Chief of the U.S. Ambassador’s Protective Detail.  In Abuja, Derek orchestrated the U.S. Embassy’s security efforts to bring humanitarian relief and counter-terrorism assistance to Nigeria’s war-torn northeast region. He has had numerous short-term assignments with DSS’ tactical unit to high-risk countries throughout the African continent and the Middle East. Before joining DSS, Derek was a major crimes police detective, a detachment commander in the U.S. Army’s 19th Special Forces Group, and a commander in the U.S. Army’s 82nd Airborne Division. He majored in Leadership Studies at the United States Military Academy at West Point and earned a masters in Military Art and Science from the U.S. Army Command and General Staff College. His hobbies include hiking, camping, horseback riding, and riding motorcycles. He is fluent in Spanish and French.